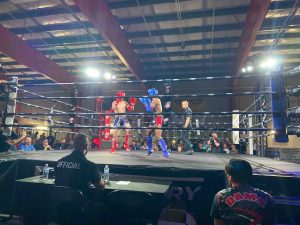 We were proud to sponsor Bushio's Live Muay Thai Fights hosted by Boss Thai Boxing & Fitness. We would like to congratulate all of the local competitors on all their great performances.

This was an intense and exciting event with lots of energy from both the amateur fighters and the crowd! This event included fighters of all skill levels - from first-time fighters looking to prove themselves to seasoned vets showing off their incredible techniques and skill.

Muay Thai is called the art of eight limbs because fighters utilize their two fists, elbows, shins, and legs to take down their opponent as explained by the owner of Boos Thai Boxing & Fitness, Yuki Yamanaka.

The event featured 10 fights or 20 amateur fighters - which included a few locals who train at Boss Thai Boxing - with each fight consisting of 3 rounds.  4 out of 10 fights were female fighters! An amazing sight in what is thought to be a male-only sport.
At Myers Kemptville, we love being part of the community by sponsoring local events like these. Afterall, we're family.